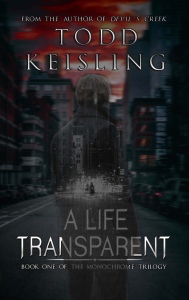 Before Devil’s Creek knocked the indie horror scene on it’s ass last year, there was A Life Transparent. You just didn’t know it. While elements of horror pop up in the first entry in the Monochrome trilogy in the form of monsters and a creepy villain, the real horror comes from the everyday.

Following main character Donovan Candle, Keisling explores the all-too common idea of falling into a joysucking vocation that doesn’t remotely resemble what you thought you’d be doing with your life. Sacrificing your worth for a steady 9-5 paycheck. Candle begins to flicker in and out of existence and the story snowballs from there, delving into the weird and territory that would feel at home in science fiction.

Keisling’s characters serve as archetypes, telling a cautionary tale as much as exploring a personal journey. The strife revolving around everything from being underappreciated in a dead-end job to trying to balance personal responsibility with truly living make the story and main characters immensely relatable.

The degree of fear harnessed from fading away while the rest of the world remains indifferent around you reaches out to a primal nature within us all.

Keisling keeps the first book in this trilogy well contained while offering up nuggets and leaving some threads to tug on for future stories. We end up with a book that satisfies on its own, but teases the reader with a wider world and further adventures to be had. The expanded version, namely the added coda, go a long way with set up, and the afterword from the author serve to enhance the reader’s understanding and enjoyment.

Check out A Life Transparent from Bloodshot Books and be on the lookout for the other books in the trilogy – The Liminal Man and Non-Entity – coming later this year.

I received a copy from the author for review consideration.

I went into this knowing it wasn’t going to be anything like Devil’s Creek, in my opinion, Keisling’s best book to date. I knew going in that A Life Transparent is a more philosophical book. So maybe you need to know that going in as well. It’s a story about a man who has a mundane life, wife, and job. Nothing about him is worth writing a note about, never mind a book. That is until he begins to flicker. Flicker like a candle in the wind.

He’s introduced to a world covered in shades of gray. Literally. The Monochrome. It’s a place where the yawning, these towering creatures that can unhinge their jaws and suck you in like they are the walking embodiment of a wormhole, and Cretins, little creatures that jump on people’s shoulders and whisper in their ears, slowly causing others to forget about you. Of course, there has to be a bad guy in this world. A ruler. And there is. But other reviews will surely cover him. I’d like to talk about how the Monochrome could easily be considered an alternate universe like that of The Matrix. What I mean by that is, it’s a world within our world. A world that doesn’t make much sense. A world that abducts people from our world for itself and there is no stopping it. There were certain scenes, particularly the last one that deals with a character named Alice, that reminded me of a later scene in the first Matrix film. For that reason, at times, Transparent put a smile on my face.

I don’t consider this a slow-burn novel, rather, I consider it to be a story that builds up toward pure chaos in book 3. Although this was originally intended to be a standalone, Transparent has a lot of worldbuilding and good pacing in it where it maintains its entertainment value as well. The second book drops later this summer with the third a few months after that this year (2021).

All-in-all, this book is a weird sci-fi with moments of dread. Like any good artist, it showcases Keisling’s ability to throw the reader in a new story while entertaining them from the first to the last page.

I received a copy from the author for review consideration.

View all posts by Brennan Lafaro