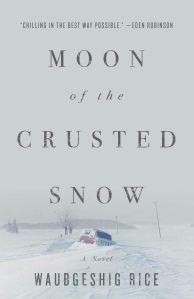 Taking place on an indigeneous reservation in Canada, Moon of the Crusted Snow roots itself as an exploration in humanity, while also introducing elements that set it apart. While not a horror novel, there are plenty of elements that fit that genre. Any time a book inserts itself into the genre of apocalyptic or post-apocalyptic, I think horror. Really, what could be more terrifying than either the world ending around you or trying to survive in a crumbled society?

Rice’s book benefits from its limited viewpoints. Things are always the scariest, the most tense, when we don’t see the monster. Think Jaws, think Cloverfield. The amount of time those monsters spend threatening from offscreen are some of the most dramatic of each respective movie. In Moon, the apocalypse happens off-camera, so to speak. Because we’re in the heads of the rez inhabitants, once communications go down there’s no way to know what’s happening in the wider world. The reader buys into the hope that it’s a glitch, but as time passes, it seems more and more likely that something’s gone terribly wrong.

We’re treated to a front-row seat of the infrastructure trying to work through the outages and take care of citizens. Enter an outsider, an unlikeable wrench in the gears named Justin Scott, who is punchable as all get-out before his introduction is even complete. As Scott ingratiates himself into town business, the story spirals towards its (seemingly) inevitable confusion.

The story is engaging and the characters are rich and meaty, but its the prose that’s the star of the show. More specifically, Waubgeshig Rice’s ability to engage the reader with his natural storytelling ability. Reminiscent of something you might read from Cormac McCarthy, Moon of the Crusted Snow deserves your attention. Squeeze it in now, because a sequel set ten years later is on the way. You’re going to want to be familiar with this new world.

View all posts by Brennan Lafaro